In late 1914, a group of men and women from the surrounding area decided that a bank headquartered in Pine Bluffs, that catered to the needs of farmers, ranchers, merchants and residents of eastern Laramie and western Kimball County was needed.  Our founders quickly developed a list of potential bankers to run the institution and a second list of approximately 600 potential investors and/or customers.  Then they began knocking on doors.

Within a very short time, the management of the bank was set.  They selected Mr. E. W. Stone as the President.  Mr. Stone was the Cashier (now referred to as the chief financial officer) of the Citizens State Bank of Cheyenne.  He was also President of the Wyoming State Senate.

The Vice President of the Bank was Mr. C. H. Malm of Albin.  He left the area as a young man to attend school in Greely, Colorado where he eventually worked at a bank before returning to the area.

Mr. A. B. Mitchell, who was the president of the Pine Bluffs Farmers Clearing house, became our first Cashier or Chief Financial Officer.

They also hired a young man by the name of W. Lawrence McGuire to be the assistant cashier.  Mr. McGuire had family in Casper and worked for banks in both Casper and Cheyenne before moving to Pine Bluffs.  However, after three years, family matters pulled Mr. McGuire back to Casper and he was replaced by another young man who was just discharged from serving in the Army during World War I; Mr. Charles C. Gross Sr.  Mr. Gross continued to work at the Bank until he became President in 1954.  A position he held until 1974, when he became the Chairman and CEO.  Mr. Gross’ linage in the Bank continues to this day with his grandson, Chairman John D. Gross.

15 investors were also soon located to fund the $15,000 of required capital.  They included individuals from Albin, Pine Bluffs, Cheyenne, Gary, Nebraska, and Denver, Colorado.  Almost unheard of at the time, there were two female investors – Mrs. John Wilkinson and Mrs. Rabou Cunningham.  The 13 male investors had last names that are still quite recognizable in the area today.  They included Mitchell, Carlstrum, Malm, Schinder, Palm, Rabou, Kelly, Dolan, Sandison, and Stone.

The Bank’s original stated business plan was simple, “Farmers State Bank will do a good conservative banking business and ask for a share of the patronage of the farmers, merchants and citizens of the local communities and promise good service and fair treatment in return.”

Much has changed in the 100 years since our founders plan came to fruition.  The roads of Pine Bluffs are now paved.  Cars and pickup trucks have replaced horses, trains, and the Model-T as the primary modes of transportation.  The silver dollar has given way to debit and credit cards for making purchases.

However, the business plan Mr. Stone set forth over ten decades ago is as relevant today as when he first proposed it.  If the Bank stays true to its original goal of operating in a conservative manner, being fair in all its dealings, and providing excellent customer service, as well as offering the modern products and conveniences that customers expect, it will be successful.

With that in mind, over the last year we installed three ATM machines to allow customers access to their cash around the clock.  We have developed plans to remodel our sole location and add a drive up lane for added convenience.  We just completed the process of reviewing our loan and deposit products and added or modified what we offer to make us even more competitive in the marketplace.  We are looking at our technology and upgraded our website, Facebook page, online banking, as well as several other systems.  Lastly, we are exploring branching opportunities and hope to add a second location in the next 18-24 months.

As we reflect on over 100 years in business and the changes we have or are preparing to implement, the Board of Directors and staff feel Farmers State Bank is well-positioned for the future and are excited to enter our second century in community banking.  We believe in remembering our past, embracing the present, and growing for the future as your local community bank.  We thank all those past and present customers, directors, and staff members who have made it happen.  For those who are not customers of the Bank, we ask you to watch what we are doing and let us know what we can do to earn your business. 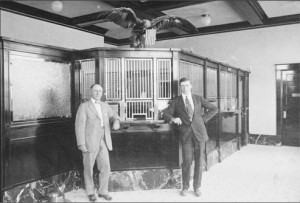 Prior to May 1, 1915, there was only one bank in Pine Bluffs; the Pine Bluffs State Bank. However, the following day, Farmers State Bank officially opened its doors on the corner of Second and Main Street. As part of its grand opening, each of the ladies entering the Bank received carnations and each of the men received cigars; a small token of a much gentler and more Victorian time.  Children entering the Bank also received a gift to help teach them the value of savings – a small locked metal bank that could only be opened by a bank employee.  Farmers State Bank was also the first business in town to offer indoor public restrooms and a waiting room where weary travelers could rest up for their long buggy or wagon trip back home to the farm or to a nearby community.

While the original bank building still stands, due to the growing needs of a prosperous business, the Bank moved into a larger building where it still operates today.  The Pine Bluffs State Bank, which was located directly across the street from the original Farmers State Bank, in what is now the Pine Bluffs Police Department, was not able to sustain itself and closed its doors a few years later.  This made Farmers State Bank the only locally owned and operated financial institution in Pine Bluffs.

From the very beginning, Farmers State Bank took steps to provide personal service and special request from its customers.  One of the first was Al Binning who owned and operated Pine Bluffs Creamery.  He insisted on settling debts with his customers in silver dollars even though paper money was available. The Bank made sure it kept a good stock of silver dollars just in case Mr. Binning walked through the front door.

It has been over one hundred years and the bank has stood the test of time making it through the Great Depression, several recessions, and countless rumors. In fact, there are only two entities in Pine Bluffs which is older – the Pine Bluffs Post and the Town of Pine Bluffs.

Staff & Board of Directors